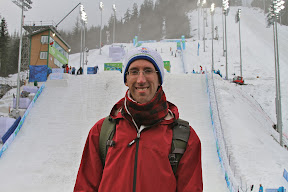 Me at the aerials venue at Cypress Mountain
Yesterday I attended the finals for men's aerials freestyle skiing at Cypress Mountain just north of Vancouver. It was the second of my flying events—after ski jumping a few days ago in Whistler—and it was great! 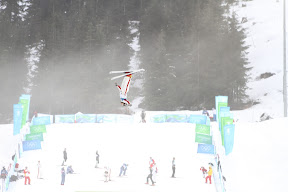 Canadian aerialist in a training jump
Twelve athletes had qualified from the earlier rounds—3 Canadians, 2 Americans, 3 Chinese, 3 Belorussians, and a Swiss athlete. When I arrived two hours before the event started, they were doing their training runs. During training, they start with easy jumps and work up to the harder jumps. In fact, in training they must achieve the same difficulty level as their hardest jump in the competition or they cannot do that jump in the actual event. The attention of the crowd was split during training, however, as the video screens showed the women's gold medal hockey match while the aerialists trained. 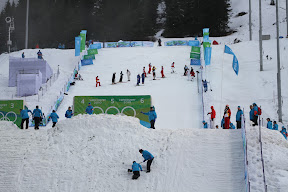 Preparing the jump for training
It was interesting to see the ongoing maintenance of the hill during the evening. After every other jump, the Smurf Shovel Brigade (the venue maintenance volunteers in blue jackets) fixed up the landing area, filling in where jumpers landed hard, corrugating the landing area by walking down the hill sideways with their skis, and tossing out pine boughs to give jumpers depth perception. 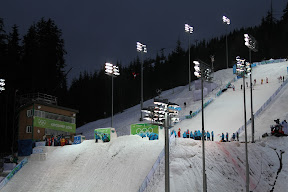 Aerialists fly up to 60 feet in the air
In the finals, each athlete gets two jumps. Canadian Kyle Nissen had a fantastic jump with a really solid landing in the first round, taking the lead by 7 points. Unfortunately, the other two Canadians both had slapbacks, "a poor landing in which the skier hits the snow on his/her skis and back". 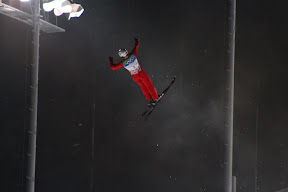 Chinese aerialist in the air
With a Canadian in the lead, the crowd was really excited going into the second round of jumps. Because the best athletes go last in the second round, we had to wait until the very end to see whether Nissen would hold on to first. He had a good jump but not as good a landing, and a lower degree of difficulty, which pushed him back in to 5th place. The gold went to Alexei Grishin of Belarus. 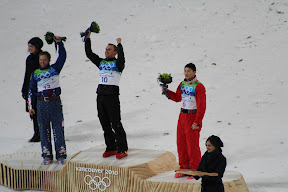 Flower ceremony for the men's aerials
This was my first event in Vancouver and a bit different from the events in Whistler. Getting to the event took a while, just because getting around Vancouver takes a long time—but I never had to wait longer than 5 minutes. Leaving the event, there were really long lineups for the buses down Cypress Mountain; they had to fit some 9,000 people onto buses back to Vancouver, so that took a while. All in all, though, it was a well-run event, made even better by fantastic weather the whole time.

Take a look at the rest of my pictures from the event.