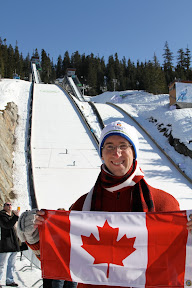 Me representing Canada at the ski jumping hill
This week's updates are coming from the Vancouver 2010 Winter Olympic Games. When I had first found out 7 years ago that the games were coming to Vancouver, I intended to attend, but I only won a single ticket in the ticket lottery. I decided that wasn't enough to merit coming across the Pacific and sold the ticket. But last week as I was watching the Olympics on TV, it looked like a lot of fun; I had the spontaneous thought that "hey, I could just go" to the Olympics, and, a few hours later, I had impulsively booked a flight and bought event tickets. 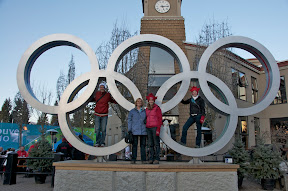 Me with the Cotton women at the Olympic rings in Whistler
I arrived on Sunday and came up to Whistler. Fortunately for me, my friend Cecilia and her family were also coming to Whistler for the games this week and graciously are letting me spend a few days in their condo. 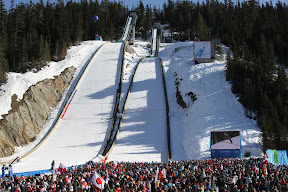 Ski jumping at Whistler Olympic Park
Today I attended my first event of the games: men's team ski jumping. I wanted to see them fly, and I wasn't disappointed. As with many sports, seeing it live is very different from seeing it on TV. On TV, you have the sensation that ski jumping involves, well, jumping. In the real world, looking up the hill, it's much more evident that ski jumping is really controlled falling down a hill. 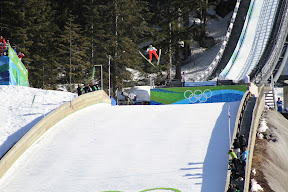 Thomas Morgenstern jumping
In team ski jump, there are two rounds. In each round, each of 4 members of the team jumps once, and their scores are added together. The top 8 teams jump again. The Canadian men were ranked 12th going into the event, and came out in 12th, so they didn't make it to the final. The Austrian team dominated the event and were amazing to watch. 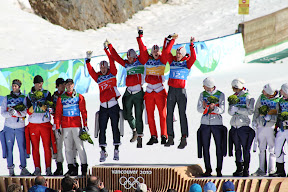 Austria wins gold!
Their final jumper, Gregor Schlierenzauer, had the longest jump of the entire 2010 games, 146.5m. I had a blast and am looking forward to the rest of my events this week.

Take a look at the rest of the pictures from today in Whistler. 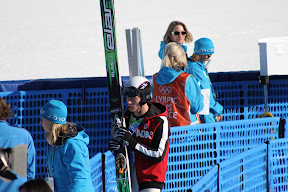 Stefan Read, Canadian ski jumper
Update 2010/02/23 22:00 PST: I learned after the event that there was a bit of a competition going on between the North American teams. The Canadians and Americans were ranked second last and last respectively, and they had a friendly wager riding on the result: each member of the losing team had to drink a bottle of maple syrup. Those poor Canadian guys...