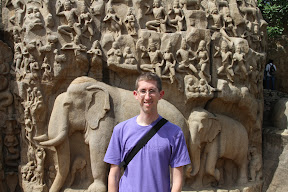 At Arjuna's Penance, Mamallapuram
I recently visited Chennai, India, for research. The project that funded my postdoc here in Brisbane was a joint Australia-India project on denial of service attacks, and we visited our colleagues at the Indian Institute of Technology (IIT) Madras in Chennai. Chennai is in the south east of India. 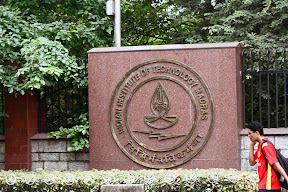 IIT Madras
Most of the days were spent working and eating. We had lots of tasty and interesting south Indian and north Indian food. I had some very good palak paneer, a dish I should learn how to make. And I enjoyed the chance to have lots of garlic and butter naan. However, I may have turned a few eyes by eating the naan on its own as opposed to using it to scoop up curry; what can I say, I enjoy good bread! 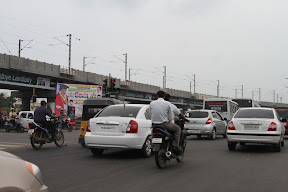 Traffic in Chennai
This was my first visit to India. One thing that really stood out for me was the chaos of the roads; sadly, the picture at left doesn't do it justice. There are almost never lane markers on the roads, and even when there are they are completely ignored. No one uses turn signals; everyone uses their horn. About to pass? Honk. Being passed? Honk. Feeling bored? Honk. I found it very loud and quite a bit annoying. The roads are very democratic, however. No matter how fast or slow you're going—walking, cycling, motor bike, truck, car, bus, or even if you're a cow—you can use the road just as much as anyone else. 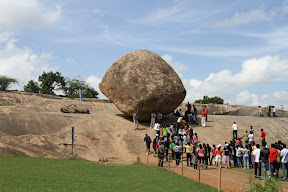 Krishna's Butterball
I had a chance to do a bit of sightseeing in south east India. 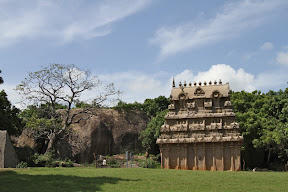 Ganesharatha, Mamallapuram
I took a day tour in a taxi down to Mamallapuram, a UNESCO World Heritage Site built between the 7th and 9th centuries. There are a variety of temples and shrines. The picture at right is a rock formation called "Krishna's Butterball" which looks like it's about to roll down the hill but in fact is quite sturdy: "Legend has it that the Pallava rulers attempted to move the boulder with help of elephants, but to no avail." (yatra.com) In the nearby park are many shrines and engravings, including the picture at the beginning of this post where I'm standing in front of a giant relief sculpture called Arjuna's Penance. 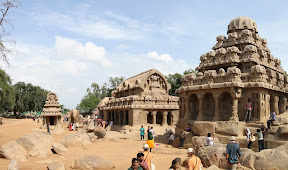 Five Rathas panorama
Another historical site in Mamallapuram is the Five Rathas, shown at right. A ratha is a chariot, and these are five shrines shaped like chariots. What's really amazing is that these five shrines were all carved out of a single slab of granite that was covering the entire site. That's right, they didn't carve each one separately, all five of them were carved from the same slab of granite.

Shore Temple panorama
Along the ocean in Mamallapuram is another temple, the Shore Temple, built in the 8th century, and still standing. I dipped my feet in the nearby Indian Ocean for the first time.