Airlie Beach and the Whitsunday Islands 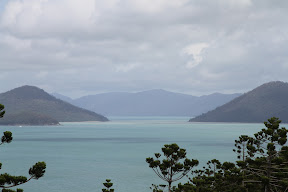 Looking across to Whitsunday Island
Over Easter, I went up to Airlie Beach and the Whitsunday Coast for the long weekend. The Whitsunday Islands are a beautiful chain of islands just off the shore a few hundred kilometres north of Brisbane. They are also very expensive, so I stayed in Airlie Beach on the shore, a much cheaper alternative to rooms starting at $300 per night on the islands. I had planned to go to Airlie Beach a few weeks earlier, but they had a bit of a typhoon and most of the area was under 10 feet of water, so I postponed a few weeks. 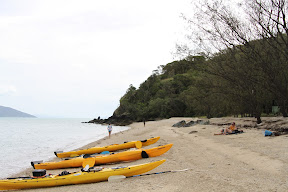 Our lunch break on South Molle Island
On Good Friday, I went kayaking in the sea around the coast. Apparently even though I've only been kayaking a few times, I'm apparently an experienced kayaker, or at least my canoeing experience makes me a relatively experienced kayaker compared to your average tourist. We had a few island stops. 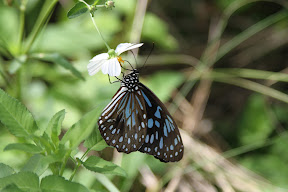 Butterfly at a flower
We had lunch on one of the islands, South Molle Island, with some spare time on the beach after lunch. Rather than lounging around, I set out with my camera for a bit of hiking in the hills of the island, and came across fields and paths filled with butterflies. They seemed to enjoy posing for my pictures. 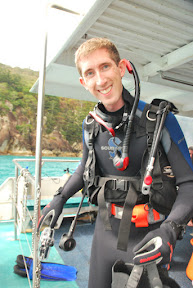 Me scuba diving at Luncheon Bay, Hook Island, Queensland
One of the main purposes of the trip was to do a bit of scuba diving. I got my PADI Open Water Diver certification in February and this was my first dive since the course. While the Great Barrier Reef does stretch as far south as we were, it is quite a bit further out from the coast than it is further north. 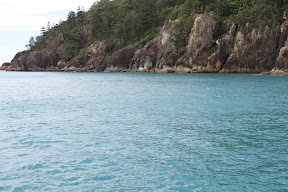 Blue water above the reefs at Luncheon Bay
I assumed that the boat I was on, entitled "ReefJet", would go out to the Great Barrier Reef, but in fact it did not, which was a bit of a disappointment. We ended up going to a place called Luncheon Bay on Hook Island (Yar!) which has a reef just off the island. I still got a good dive in and got to practice my skills, and, as always, I enjoyed swimming with schools of fish. 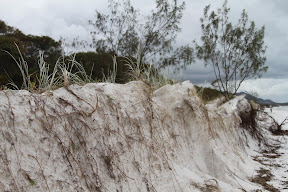 Sand dunes on Whitehaven Beach
Our last stop before heading back to shore was Whitehaven Beach on Whitsunday Island, considered one of the most beautiful beaches in Australia, although the day we were there the weather was cloudy and the beach was not very photogenic. Apparently the sand from that beach is quite pure (98% silica) and was used in the construction of the Hubble Space Telescope.

The rest of the weekend was quiet and relaxing. I took a bus way out of town to go to church on Easter Sunday. (While the church was packed for Easter, the church and community were a bit underwhelming: the "choir" was a tape player.) And mostly I just read, having found a nice used bookstore in town.

I even managed to fit all my scuba gear back in my suitcase—and relatively dry too—to get back home.

More pictures from the trip are available in 2010's Australia gallery.