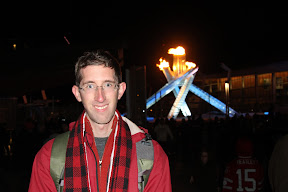 Me with the Olympic cauldron
I suppose I should say a little about how I ended up going to the Olympics in Vancouver. Since Vancouver was first awarded the Games back in 2003—which incidentally happened while I was visiting the nearby city of Seattle—I had wanted to go. I had even told my friend Scott, when I found out that he was moving to Vancouver, to reserve a place for me on his couch in February 2010. Last year, when VANOC announced the ticket lottery, I put in requests for about 8 events, but alas only won one ticket. I decided that one ticket was not reason enough to fly across the ocean to Vancouver, sold the ticket on VANOC's resale website, and that was that. 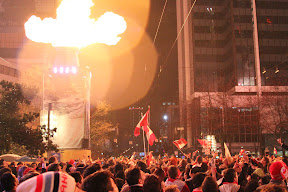 Flames lighting the crowd at one of Robson Square's nightly fireworks celebrations
Fast forward to February 2010. I spent the first weekend of the Games camped out on the couch, watching the Opening Ceremonies and waiting for Canada to win its first gold. I watched speed skating and ski jumping and checked out pictures from friends in Vancouver on Facebook. It looked fantastic. And then Monday evening I had the spontaneous thought: "well, I could just go". 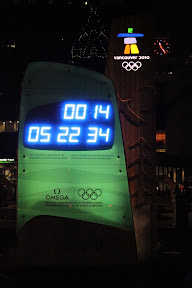 The Olympic countdown clock, counting up
The genie was out of the bottle. I looked up flights and checked the availability of event tickets. An hour later (when the Eastern timezone was awake) I ran the idea past a couple friends and my parents to see if I was crazy. Another half hour later, my flights were booked, event tickets purchased, and accommodations arranged. It was hard to sleep that night as I was so excited. The clock was ticking. 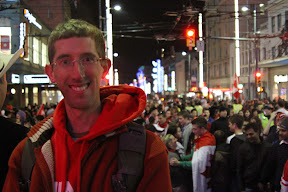 Me with the crowds on Granville Street
Over the last two weeks, I've written about my time in Whistler and the various events I attended. It's fitting to close with a little bit about what Vancouver was like.

During the first week of the Games, I heard and read a lot about how Vancouverites were embracing the Games, and how everyone was enjoying themselves so much. When you encounter a story in the news, it's hard to know whether it's something that reporters are blowing out of proportion—something that the average person on the street wouldn't even notice—or whether it truly is like that on the ground.

Flames lighting the crowd at one of Robson Square's nightly fireworks celebrations
Let me tell you, downtown Vancouver was crazy during the Olympics. The centre of the insanity was the intersection of Granville and Robson streets. Both of those streets were closed to traffic throughout the Olympics, and Robson Square, one block north of that intersection, was a major outdoor gathering point. Each night during the Games, there were fireworks at Robson Square, and I met up with fellow Waterloo alum Ian to see the show one night. 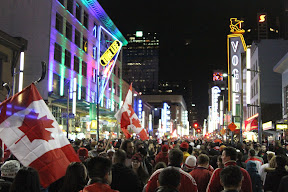 Crowds celebrating the last night of the Olympics on Granville Street
I ended up downtown a few nights, including the night that Canada defeated Russia in hockey and the last night of the Games after the Closing Ceremony, the day that Canada was gold in men's hockey. As you can see the streets were packed! Filled with a lot of young people dressed in Canadian hockey jerseys or Team Canada clothes, wanting to do nothing more than high five everyone in sight. 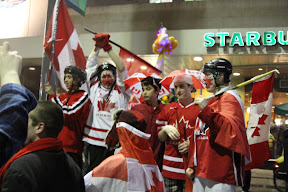 Hockey fans on Granville Street
The last night I was downtown there were a few spontaneous rounds of O Canada to be heard while walking up and down the street. The only experience I can even remotely compare it to is being in Ottawa for Canada Day, except this was every night for two weeks in February. It was truly incredible and one of my favourite memories from the Games.

Was it the patriotic expression of a newly confident Canada emerging on the world stage as the newspapers were debating? During my life, I think Canadians have always been great fans of the Olympics and the Canadian team—the prevalence of maple-leaf-covered Roots and now Hudson's Bay clothing being just one example—and this was just the next step. From what I read about at Dundas Square in Toronto and the constant interest from friends across Canada on Facebook, it seems the excitement stretched far beyond Vancouver, across the entire country.

The last big Olympic experience I had was flying out of Vancouver airport on the day after the Closing Ceremony, the busiest day in the history of Vancouver airport, with 39,000 people departing. While I wasn't expecting chaos—they made a big deal out of being prepared for this—I was at least expecting a bit of a crowd. But I guess my flight, at 11:45pm, was too late for much excitement. When I arrived (4.5 hours early, as recommended), there was no line up for check-in, no line up at the Olympic souvenir shop, no line up at security; it was a run-of-the-mill quiet Monday evening at a medium-sized airport. How disappointing! 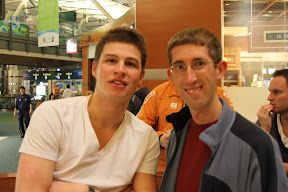 Me with Dutch gold medallist speed skater Sven Kramer at Vancouver airport
As it turns out, I had forgotten to bring the card that gave me access to one of the lounges at the airport, so once I got through security I wandered the terminal a bit to see what was going on. There were still some athletes there waiting for flights, including a few folks from Great Britain and a sea of orange jackets from the Netherlands. As I went over to Tim Horton's to get my last Tim's hot chocolate for some time, I recognized one of the Dutch athletes (who was the only one not in orange): Sven Kramer, presently the best long track speed skater and gold medallist in the men's 5000m. I watched him (on TV) win gold during the first day of the Games. He kindly indulged my request to take a picture with him. It was a great way to end my trip to Vancouver.

I'm so glad I went to Vancouver and Whistler for the Olympics. It was one of the best experiences of my life!

Getting to Sochi in 2014 may be a bit more difficult than Vancouver, though. But London's conveniently accessible from anywhere on the planet, isn't it?