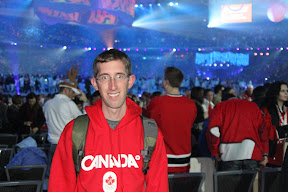 Me at the end of the Closing Ceremony
Sunday evening I attended the Closing Ceremony of the Vancouver 2010 Winter Olympics. Although the ceremony started at 5:30pm, we the audience needed to be in our seats by 4:30 for our rehearsal. Working back from that, allotting extra time for lineups at security and aiming to avoid the craziness that would be downtown Vancouver once the hockey game was over, I arrived at BC Place a bit before 2pm; there was no lineup at security whatsoever, and I easily made my way into the stadium. 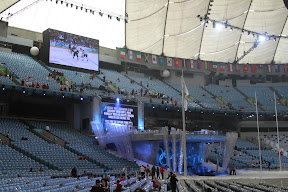 Watching the Canada vs. USA hockey game before the Closing Ceremony
When I arrived in the stadium, the first order of business was to catch up on the Canada versus USA hockey game, which was playing on the big screen. What an exciting game that was! I don't follow hockey much but even I could tell -- without commentary, as we got the raw feed in the stadium -- that it was a really well-played game. 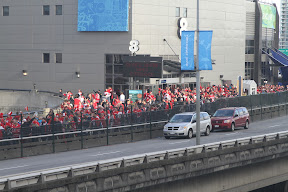 A sea of red leaving the hockey game next door
Not knowing the rules of Olympic hockey, I didn't realize that it was sudden-death overtime; while I was excited at Crosby's overtime goal, it took another minute for me to realize that the game was over. I was thrilled for many reasons: for the success of the men's hockey team, for Canada winning 14 gold medals, and for that being a great note on which to start the Closing Ceremony. 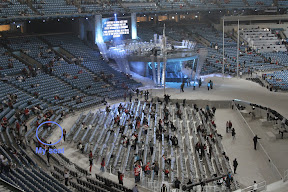 My seat for the Closing Ceremony
After the game finished, I started wandering around the stadium to take some pictures and see what was going on. One of the best pictures I took before the show started was this panorama. On the left side of the picture, you can see: my seat in the bottom left corner (as noted on the detailed image at right), the podium where speeches were given, flag poles; in the centre: the VIP seating and the three-legged cauldron, and closest to the camera the beginning of the athletes' seating; and at the right, the Olympic rings and another stage.

BC Place before the Closing Ceremony began panorama 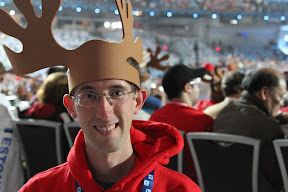 Me with my moose antlers at the Closing Ceremony
At 4:30, the audience participation rehearsal started. At our seats was a custom kit with a number of items to use during the ceremony, including elegant foam moose antlers, as you can see, to wear during the spectacular Canadian stereotypes segment. 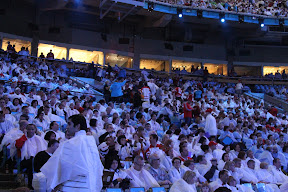 Audience members in their white and light blue ponchos
We also had ponchos -- white or light blue (mine was light blue) -- to wear during the ceremony so that we looked better on television when they projected lights onto the crowd. 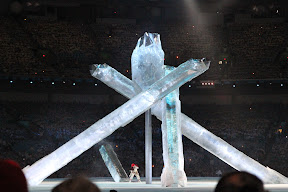 Clown mechanic repairing the cauldron
And then, at 5:30, the ceremony began, with what ended up being my favourite part of the whole ceremony. When I arrived in the stadium, I noticed that the cauldron in the centre only had three legs. I figured that they had just decided to go with that after the fourth leg hadn't come up during the Opening Ceremony. When the clown mechanic appeared at the start and started "repairing" the fourth leg, everyone in the stadium roared and jumped to their feet. That and Catriona Le May Doan lighting the cauldron made for a perfect start to the ceremony. Although the heat coming off the cauldron didn't reach me, it did cause the curtain screens hanging in the centre of the stadium to billow a lot. 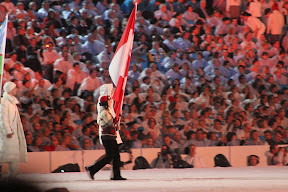 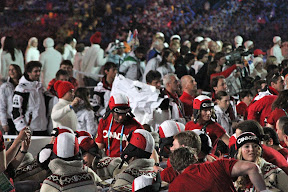 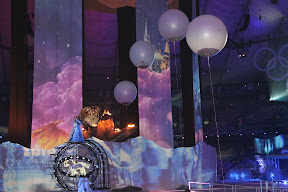 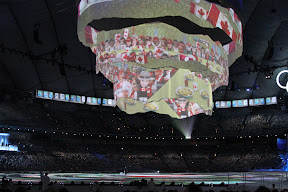 Michael J. Fox's speech during the I Am Canadian segment
As the ceremony progressed, we had the beautiful presentation from Sochi 2014, followed by speeches by Canadian actors William Shatner, Catherine O'Hara, and Michael J. Fox. 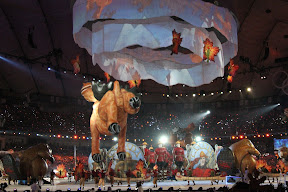 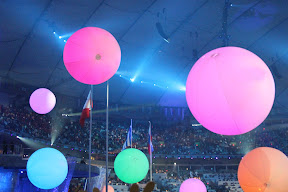 Bouncy balls at the end of the Closing Ceremony
Simple Plan put on a good show, as did Hedley. The concert ended with a bunch of huge glowing bouncy balls being released for the athletes to play with and then eventually send into the crowd. The bouncy balls reminded me of the beautiful Sony BRAVIA bouncy balls commercial. 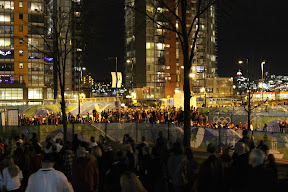 Crowds leaving the Closing Ceremony
After the ceremony I joined the crowds and headed towards downtown Vancouver to see the chaos on Granville Street. I'll write more about what Vancouver's been like during my time here, but the crowds on Sunday night were bigger and happier than any of the previous nights, and why shouldn't they be: Canada just won gold medal hockey against the United States, had its best Winter Olympics ever, and showed the world a great time! Thanks, Vancouver!

See the rest of my pictures from the Closing Ceremony in my Vancouver gallery.