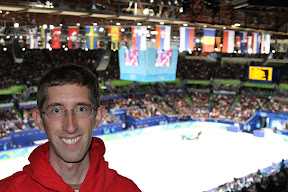 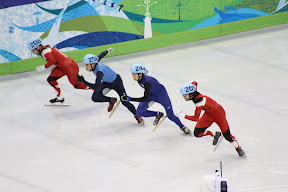 The start of the men's 500m final
There were three finals being held that night: men's 500m, women's 1000m, and men's 5000m relay. For the shorter distance races, they first worked through quarterfinals and semifinals of each, before having the B and A final races.

Short track races are crazy and exciting. It's such a small rink to be racing so fast on—just a normal hockey rink, I believe—and the racers stay so close. A single slip up by one of the racers can cause a crash that takes out another racer and ends their chance at gold, so it's a really nail-biting event when you're there in person. 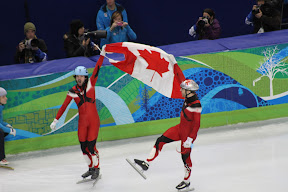 Charles Hamelin and Francois-Louis Tremblay celebrating their gold and bronze medal-winning races
All of the events had Canadians racing. Two Canadian men made it to the final of the 500m race: Charles Hamelin and Francois-Louis Tremblay. Hamelin spent most of the race in the lead but on the second last lap was overtaken by Si-Bak Sung of South Korea. Coming out of the last turn, Hamelin regained the lead, and then suddenly there was chaos: the South Korean fell, bounced off the pads, taking out Canadian Francois-Louis Tremblay; an unstable Charles Hamelin crossed the finish line on one foot just before spinning around on his skates off balance, with Apolo Ohno right behind him. The crowd erupted having seen that Hamelin crossed first, but then uncertainty set in as the referees consulted. After a tense minute with an entire coliseum holding its breath, the results came in: gold for Hamelin, silver for South Korea, bronze for Tremblay, and Apolo Ohno disqualified for interference. Crazy! If you haven't seen the race, I highly recommend watching it. On CTV Olympics' video player, scroll down to "Golden Moments", hit the arrow to go to page 2, and select "Men's 500m Final: Hamelin wins gold".

Next up was the women's 1000m final. Unfortunately, Canadians Kalyna Roberge and Jessica Gregg didn't qualify from the semifinals, so they skated in the B final, which Roberge won. The gold medal was won by Wang Meng of China who had dominated her quarter and semifinal races. 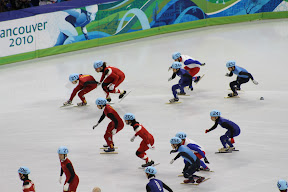 Transitions during the men's 5000m relay
The last race of the evening—and indeed the last short track speed skating race of these Games—was the men's 5000m relay final. The qualifying races had taken place more than a week earlier, with 5 teams of 4 making the final race: 20 skaters on the ice, which is pretty chaotic, so chaotic in fact that they scared the on-ice cameraman off the ice! In the relay race, one member from each team races on the outer part of the track while the remaining members of the team circle on the inside of the track waiting to take over. They switch about every lap and a half, and the race is about 45 laps long in total.

China took an early lead, but about half way through Canada managed to squeeze in front. Canada opened up quit a gap with about 10 laps to go by changing their relay timing—continuing skating while all the other teams passed off—but the other teams managed to make up the distance. The last few laps were pretty tense, as the Koreans and Chinese stayed in close. The Canadians maintained their lead all the way to the finish line, but in the last turn, the Chinese skater slipped a bit, leaving the Koreans with the silver and the Americans with the bronze. 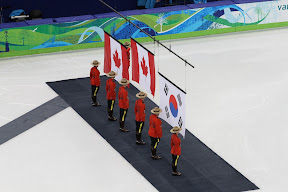 Flags being raised during O Canada for the men's 500m short track medal ceremony
We were very lucky that they decided to do the medal ceremony at the venue right after the race. For most of the events during the Vancouver Olympics, medals have been presented at victory ceremonies—at either BC Place in Vancouver or Whistler Medals Plaza in Whistler Village. However, for a few events, such as figure skating, they have been doing them right at the event venue. They did the short track medals at the venue as well, probably because they needed to start preparing BC Place for the Closing Ceremony two days later. 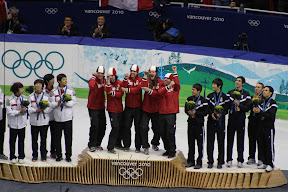 Team Canada on the podium with Korea in silver and USA in bronze
Regardless, it was a bonus for us: we got to see three Canadian medals presented in one place—more than at any other medals ceremony at these Games—and got to sing O Canada twice that night. During one of the singings of O Canada, I gave my friend Katie a call on my cell phone so that she could join in.

Although I've enjoyed all the events I've attended at the Olympics, short track speed skating was my favourite. Overall, it's just a fantastic, exciting sport to watch. And two O Canada's in one night made it all the more rewarding!

Take a look at the rest of my pictures from short track speed skating.