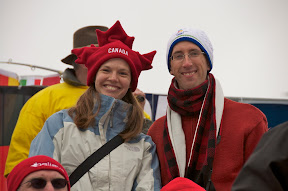 Cecilia and I at biathlon
Yesterday I attended the women's 4x6km biathlon relay at the Whistler Olympic Park with the Cotton family. 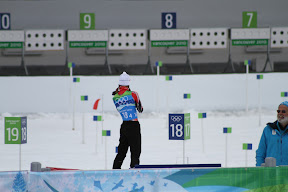 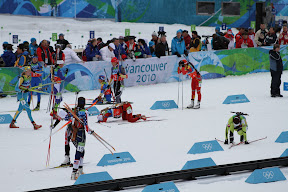 The carnage in the transition area
They also have an additional 3 bullets in case they miss some of the targets, but they have to reload those bullets manually. Finally, if they still haven't hit all the targets, they have to do a penalty loop. 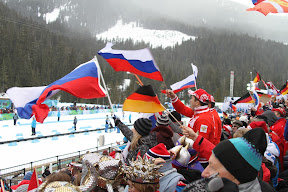 Russian fans cheering on their winning team
As with the ski jumping event I attended the day before, the Canadians and Americans were the lowest ranked teams heading into the competition. At the top of the field were the Russians, Germans, and French. The German and Russian fans were out in full force, wildly waving their flags. Our team did decently, considering we're not a northern European powerhouse: the Canadian women improved from their rank, finishing in 15, three spots above their rank, and two spots ahead of the Americans. 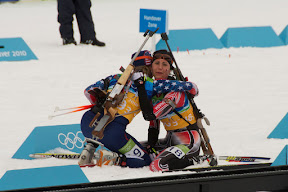 Canadian and American skiiers embracing after a tough ski
The Russians won the race (and their fans were happy about that, let me tell you!). The French had been in the lead but then had a bad shooting round and had to take two penalty laps. Remarkably, the French fought their way back from ninth place back up to second in an amazing recovery from their penalty laps.

Today I leave Whistler and head down to Vancouver to enjoy a few more events and the closing ceremonies.