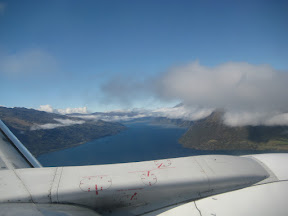 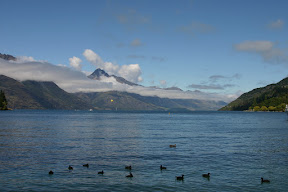 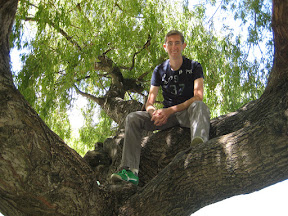 In a tree, Queenstown 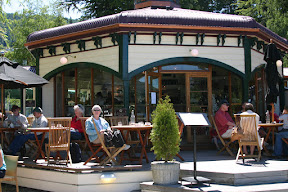 Mom at the restaurant where we ate brunch in Queenstown 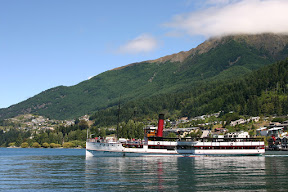 A steamer sailing out of Queenstown 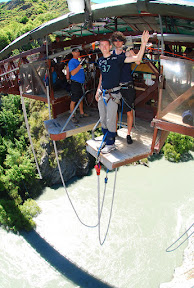 Ready to jump off of Kawaru bridge
Queenstown is a bit of an "adventure sports" destination, so one of the main things I planned to do in Queenstown was go bungy jumping. Mom was, as you can imagine, thrilled about seeing her only son dive off a bridge with only a little bungy cord holding onto him. We went to the Kawaru bridge AJ Hackett bungy jump location, which was the first commercial bungy jumping location in the world. 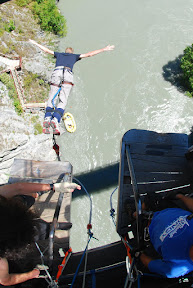 Diving head first into a river 43m below
It's a historic bridge 43m metres above the Kawaru river. I guess 43m isn't too high, really, as far as bungy jumps go, but it was still high enough for me. I wasn't at all scared when we arrived or when I was getting geared up for the jump. But standing on the edge of the platform and looking down to see a blurry (no glasses allowed during bungy jumping) river a long way below, a bit of fear kicked in: Nature did not intend for me to jump 43m and live. Fortunately for me, the company I paid good money to did intend for me to live after jumping 43m. Even knowing all that, I couldn't help but scream as I was in free fall. 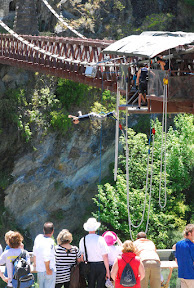 Oh no, he's falling!
For good measure, they dunked me in the river up to my shoulders. That was a bit of a surprise. I knew that they were going to do this—they asked me about it while getting me set up—but the river still came up so quickly and I was dunked and popped back up before I knew it. 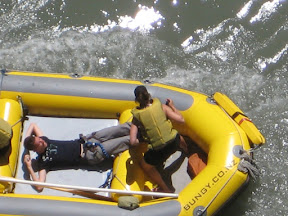 Me on the recovery boat
Then there was bit of bouncing up and down, which didn't feel like much motion to me but was quite a lot of motion when you watch it from the side, and scrambling onto the recovery boat in the river below. 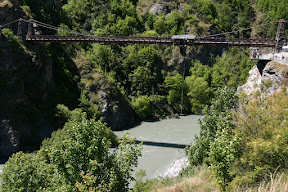 Bungy jumper dunked into Kawaru river
With the exception of a bit of water up my nose, I survived the incident unscathed. More importantly, so did my mom, and there's photographic evidence to prove it: in the picture above at left ("Oh no, he's falling!"), you can see my dad and mom next to each other (dad in the white hat, mom in the pink hat) and mom holding a camera up to take a picture just as I've jumped.

My first bungy jump was great. I'll try it again some time. Mom will probably request that I not tell her until after I've done it.