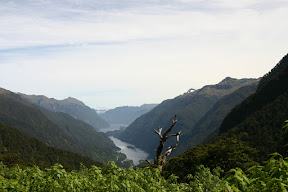 Doubtful Sound, viewed from atop the Wilmot Pass
Te Anau is the gateway to Fiordland, a mountainous region on the west coast of the south island of New Zealand which features many fjords opening onto the Pacific Ocean. 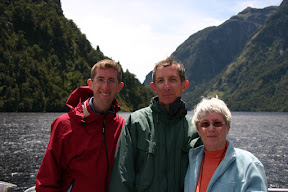 The Stebila Family on Doubtful Sound
My parents and I took a day cruise on Doubtful Sound, one of the largest fjords in the area. It's very remote: we took an hour boat ride across a first lake (Lake Manapouri) and then a bus through a mountain pass (Wilmot Pass) to reach the sound. 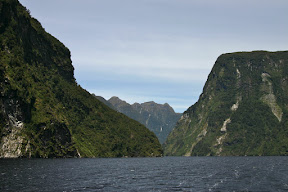 Looking down Crooked Arm
Doubtful Sound features mountains diving right into the water and continuing to the bottom several hundred metres below. The fjords were gouged out by glaciers in the last ice age; the tops of the glaciers reached nearly to the tops of the mountains. When the glaciers melted, sea level rose to the point that it's at now. 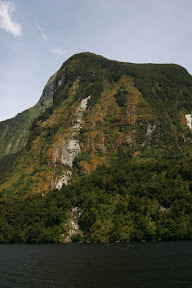 The remains of tree slides
Except in the rare steepest parts, the lower parts of the mountains are covered with greenery of all types. You'll see the occasional scar on the side of the mountain, however, as in the picture at left. These are the result of occasional avalanches—but of trees, not of rocks or snow. 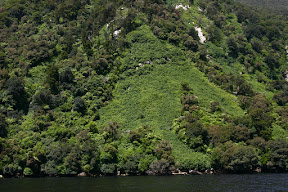 Revegetation after a tree slide
When an earthquake happens, sometimes the trees will lose their footing on the very steep slopes and just centimetres of topsoil, and come careening down the mountain into the water. At left, the remains of a tree avalanche from the last year or two. At right, growth in another area about 10-20 years after a tree avalanche.

Cloud-covered mountains at the end of Doubtful Sound panorama 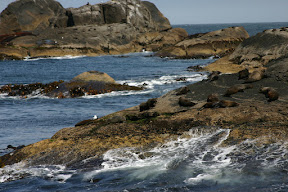 Seals and waves
Out at the end of Doubtful Sound, as it meets the Tasman Sea in the Pacific Ocean, we came across a little island that's home to a bunch of seals. They happily ignored us and kept on enjoying the rare sun in an area with more than 200 days of rain annually totally 7.6m of rain. 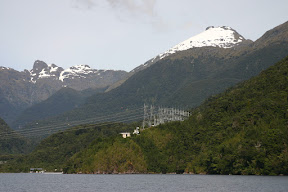 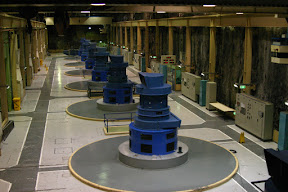 Interior of Manapouri Power Station
To reach the machine room where power is generated, we had to take a 2km gently spiralling access tunnel 193m underground. Water falls straight down from Lake Manapouri, spins the turbines, and then travels a few more kilometres horizontally to exit into Doubtful Sound. An impressive bit of engineering to say the least!