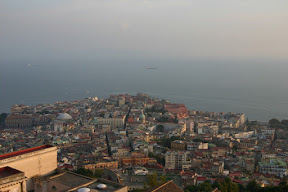 View of Naples and the Mediterranean Sea from Castel Sant'Elmo
While attending the conference in Vico Equense, Italy, I found out—through the cyberstalking magic of Facebook—that my former next door neighbour from residence at St. Jerome's, Greg, now a grad student in CS in Waterloo, was also in Italy in the Naples area after attending a conference. We arranged to meet up in Naples to do some exploring. 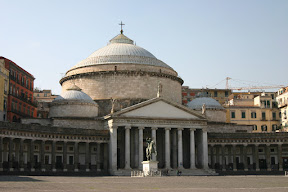 Basilica San Francesco di Paola
Greg and his girlfriend Lisa had spent a few days in Naples already, which relieved me, because I was a bit worried about visiting the city. My Italian friends in Windsor had warned me to be careful in Naples—it has a gritty reputation. But I was pleased that I had absolutely no troubles in the city. It felt friendly, more so than Rome, for example. I met up with Greg and Lisa at the train station, and we set off. 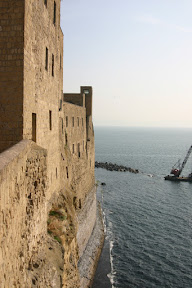 Sheer walls of Castel dell'Ovo
We decided to check out some of Naples' castles. Our first stop along the way was the Basilica San Francesco di Paola on the Piazza Plebiscito, which you can see above at right. We continued on to our first castle, the waterfront Castel dell'Ovo—the egg castle. The theme of castles in Naples, as you can see from the picture at left, was tall, sheer, imposing walls. Walls that you would never dream of trying to scale. Whether history found the walls as imposing as I did I cannot say, but I think scaling the walls of this castle ranks up there with trying to invade Russia in December on the list of bad military ideas. The panorama below shows the view of Naples from this waterfront castle. 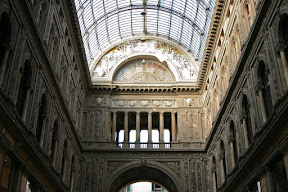 Archway of the Galleria Umberto
We headed back into the city, briefly visiting the Galleria Umberto. We stopped nearby for lunch at a pizzeria. Naples is the home of the pizza, or at least it claims to be, and its speciality—the original pizza—just happens to be my favourite: margherita pizza, just tomato sauce and mozzarella (and basil leaves). Absolutely fantastic. I defy you to make pizza better by adding more ingredients. I don't believe it can be done, and if you don't believe me, then you need to eat pizza in Naples. 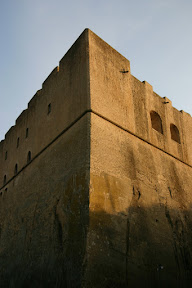 Imposing walls of Castel Sant'Elmo
We continued on to our second castle, Castel Sant'Elmo, high on a hill overlooking the city. If you thought invading the last one was a bad idea, this one was even worse. It was hard to tell where the rock foundation of the hill ended and the castle walls began. Where the castle walls ended, however, was very clear: way up there! 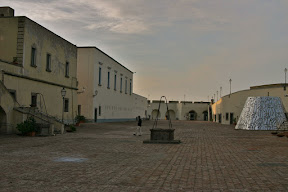 Top of Castel Sant'Elmo
And once you walked up the hill, around the castle, up some pathways, across the drawbridge, and up countless passage ways cut from solid rock, you made it to the top of the castle, where a small village was waiting for you. Best of all, for the tourist at least, it had a spectacular 360º view of the city. Here's a 270º view looking out over the city of Naples and the Mediterranean sea. 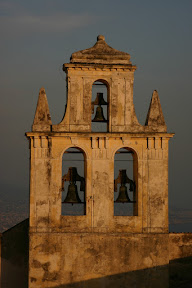 Bell tower over Naples
I'll close off with one more picture from Naples: the bell tower of the church at the top of the hill beside Castel Sant'Elmo. I thought it looked particularly awesome at sunset.

The rest of my pictures from Naples and the conference site are available in my gallery.