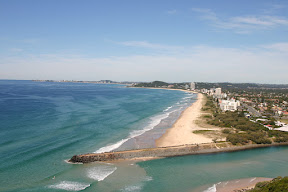 View south along the Gold Coast
This past weekend I went to the beach for the first time since I arrived in Australia. I went to Burleigh Heads, on the southern end of the 30km stretch of beach called the Gold Coast, about 50km southeast of Brisbane. The most popular beach on the Gold Coast is the famous Surfer's Paradise, which is behind me in the picture at right. 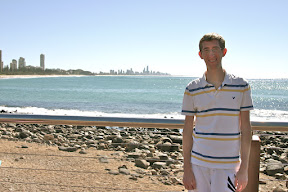 Burleigh Heads, recommended to me by a surfer in my office, is quite different. It's like a town with a beach. There's a burger joint across the street and an ice cream stand in a pavilion just off the beach. The water was a little cool, and I ended up walking along the beach and just laying in the sun instead of swimming. 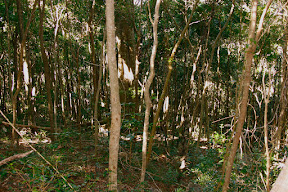 Trees along the trail in Burleigh Heads National Park
I also did a short hike in the small Burleigh Heads National Park, which is on a bluff at the end of the beach overlooking the ocean. They say you can sometimes see whales from the lookout atop the bluff, but the only wildlife in the ocean were surfers trying to catch a wave. My skin is a little less pale than it was before the trip to the beach and without a sunburn, so it was a successful trip!

See the rest of my pictures from my trip to Burleigh Heads beach in my photo gallery.