On Sunday I went for a bike ride from my home in downtown Brisbane to Mount Coot-tha, a mountain on the edge of Brisbane, about 5km from the downtown area. 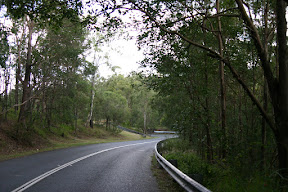 On the scenic road through Mt Coot-tha
Being "Mount" Coot-tha, it's not all downhill. In fact, there are quite a few uphills. According to my GPS, my total climb was 541m over a 28km ride. It felt like more. At one point while riding up a hill I got passed by a runner who was jogging up the hill. And the downhills never seem quite as long as the uphills were, except for the straightaway downhill out of the park where I topped out at 52.5km/hr, pretty darn fast! 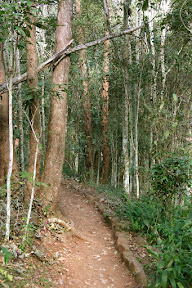 Simpson Falls hiking trail, Mt Coot-tha
I got off my bicycle for a little bit and went hiking (or as the Australians call it, "bushwalking"). My destination was the mighty Simpson Falls. But they ended up not being very mighty: a dry summer had just wound up here in Brisbane and there hasn't been too much rain lately. 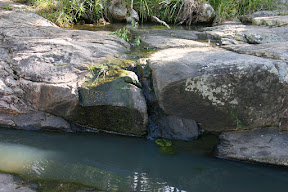 Near the end of the circuit around Mount Coot-tha was the lookout point. Besides featuring a great view of downtown Brisbane as you can see, it also featured ice cream, which ended up being a very important part of the bike ride. While at the lookout, I parked my bike right next to the bus stop for the bus that went from the lookout at the top of the mountain to the street corner 150m from my home in Spring Hill. 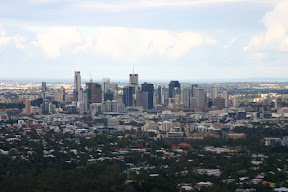 Brisbane Central Business District from Mt Coot-tha
Good thing I didn't know about the bus until I got all the way up there!

I will probably cycle out to Mount Coot-tha again when I'm looking for a good bicycle workout. I might even try a run around the road there when I'm up for a little more distance. It's almost exactly a 10km loop, I just have to get out there and back, and I'm sure the bike ride home will be a bit harder after running 10km of hills.