A short tour of Brisbane 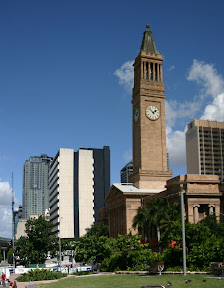 Brisbane City Hall
On Sunday I went out with my camera to take a few pictures of Brisbane so that you could all come on a little bike tour with me. In this blog entry, I'll mention some of the main sights in Brisbane and show you some thumbnail pictures (which you can click on to see in full). You can also go to the full gallery to see more full-size pictures and to see the locations of the pictures on a map of Brisbane via Google Maps.

Our tour starts at Brisbane City Hall (at left), which is about 500 metres from my hotel. The bell gongs every 15 minutes during the day to remind you that it has a bell. Looking south in the picture, you can see the Central Business District behind City Hall. 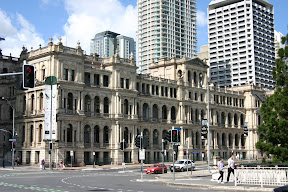 Treasury Casino
In downtown Brisbane is the Treasury Casino (at right). It's located in the former treasury building, which is a strange little twist. I haven't been inside yet to lose any money. 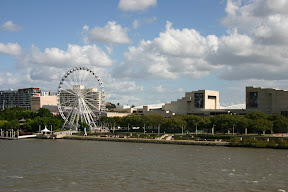 South Bank
Brisbane is split by the Brisbane River which winds its way through the city. Across from the Central Business District is the suburb (in Australia they call neighbourhoods "suburbs", even if they're not suburban but urban) South Bank which has nice parklands along the river front. When I was in Brisbane in 2007 for a conference, we spent a lot of time in South Bank and even went to a pool / beach there.

Brisbane panorama
At right is a panorama of the Central Business District taken from across the river in South Bank. The Gardens Point campus of the Queensland University of Technology is on the right hand side of the picture.

Information Security Institute (126 Margaret St)
My building, a picture of which is at left, is among the last cluster of tall buildings about three-quarters of the way along the picture. I live in Spring Hill, the neighbourhood immediately north of the CBD, behind the building that's under construction on the left side of the picture.

Enjoy the rest of the pictures!