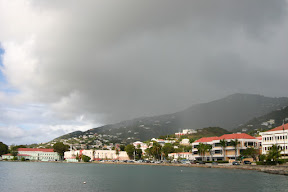 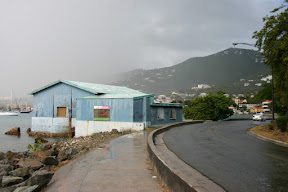 Roadside shack in the rain 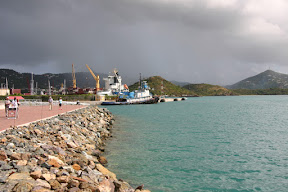 Our last island stop in the Caribbean was Saint Thomas in the US Virgin Islands. Saint Thomas is an American territory but still has a European colonial flavour to it, having been a Dutch island until 1917. For example, cars in Saint Thomas drive on the left but are right-hand drive cars, putting the driver at the left-most edge of the road, rather than toward the middle of the road.

I wandered around in the morning after we docked in Saint Thomas and got caught in a rainstorm, as you can see in the pictures above.

Back at the dock around lunch, after the rain had cleared a bit, I captured these pictures of iguanas sunning themselves on the rocks. 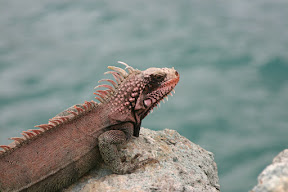 Iguana on the rocks, ready for his close up 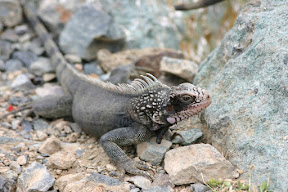 Iguana on the rocks 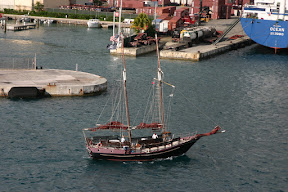 Bones snorkelling pirate ship
My final excursion during the cruise was a snorkeling expedition on the Bones Pirate Ship, which you can see sailing in the harbour at right. We sailed 4km to the Buck Island National Wildlife Refuge. Sailing there was actually quite rough, and the weather was not particularly pleasant, so we got pretty wet and it was fairly cool. Even when we anchored off of Buck Island for our snorkeling, the water was still a bit choppy (nothing compared to the North Atlantic, I'm sure, but I'm a landlubber), but one I got in the water and started snorkeling I didn't notice the waves. In the shallows surrounding the island we saw lots of fish, coral, and a few little turtles. The sun came out and started warming us up, making it a much more enjoyable experience. Sailing back to the Queen Mary 2 was much more enjoyable with the sun keeping us warm and the beverages keeping us cool. I got my very own pirate tattoo as well, but somehow that picture won't be ending up on my blog. 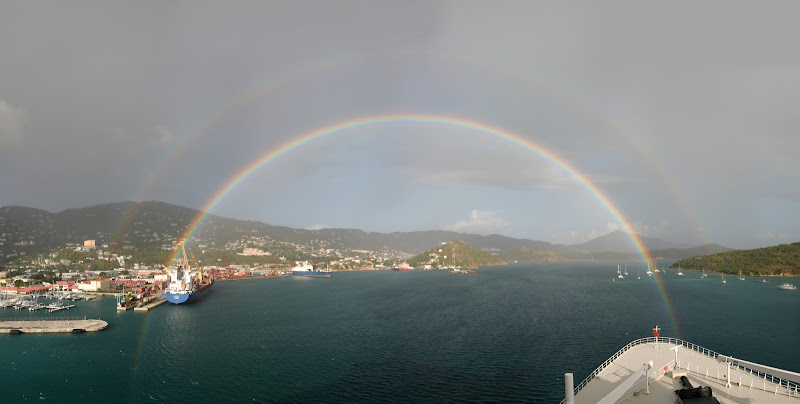 After our pirate ship dropped us off next to the Queen Mary 2, I headed up to the observation deck to take a picture of it sailing away. While I was up there, a rainbow appeared across the harbour in Charlotte Amalie, the capital of the US Virgin Islands. I dutifully pulled out my camera and shot lots of rainbow pictures, when a double rainbow started to make itself known. The picture at left is a panorama assembled from 19 different pictures and, I think, one of the best panoramas I've taken. I will work on a way of making the full resolution panoramas available on the website, but take a look at the picture at left in the meantime. After reading the Wikipedia article on rainbows, I learned that the colours are reversed between the two rainbows: the inner primary rainbow goes from blue (inside) to red (outside), and outer secondary rainbow goes from red (inside) to blue (outside).