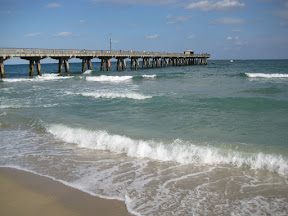 Waves and the pier at Fort Lauderdale beach
My parents and I went to Florida for New Year's this past year and spent a few days in Fort Lauderdale before taking off on a Caribbean cruise. It was the first time (that I can remember) that we went away around Christmas or New Year's, and let me tell you, arriving in Florida and walking on the beach was absolutely fantastic! 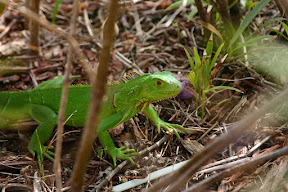 Green iguana hiding in the shrubs 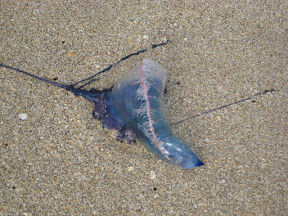 Portuguese man o' war, closeup
One of the neat things that happened while I was there was seeing some interesting animals. The beaches were covered with Portuguese man o' war (which, I learned, are not jellyfish), so you had to be careful walking (it was too cool for me to swim, anyway). And at our hotel we saw a cute little green iguana wandering around as well. 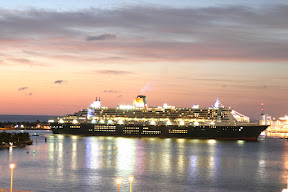 Queen Mary 2 arriving at Port Everglades early in the morning
After spending a few days with our friends the Peters Family, they left for a 24-hour sprint up the I-75 back to Windsor and we got ready for our cruise on the Queen Mary 2, which you can see arriving early in the morning in the picture at left. I will write more about our cruise later, as I start going through the hundreds of pictures I took throughout the Caribbean and on board ship.

View the rest of my 2009 Florida pictures.