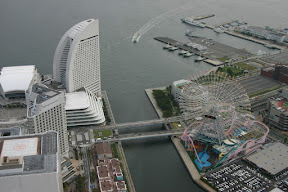 Yokohama Grand Intercontinental Hotel
I gave my talk at the conference this morning and wasn't booed off stage. The conference was held in curved building at the centre-left of the picture at left. The conference has wrapped up and I'll be heading up to Tokyo tomorrow for a few days, then down to Kyoto and Hiroshima, with a few stops along the way. 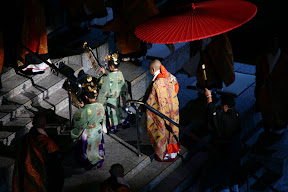 Shomyo monks in Yokohama 2
As I went out to get some dinner tonight, I happened to encounter a group of Buddhist priests doing performance of chants, called shomyo, just outside of my hotel. The priests are from the two holy mountains in Japan: Koyasan and Hieizan. (Actually, it was a rehearsal tonight for the big event tomorrow; but all the better, as it meant less people were around.) 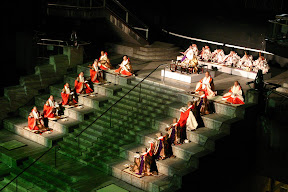 Shomyo monks in Yokohama
In the picture at right, the priests on the stairs are chanting while the row of priests in the upper right play various musical instruments. At left, the priests are processing up the stairs and the presiding priests (if that's the right term) is being guided by two small children.